Henryk Grossmann’s Breakdown Model: On the Real Cause of the Fictitious Breakdown Tendency 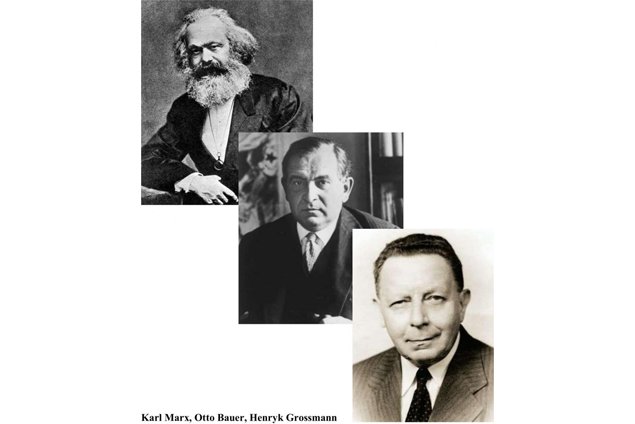 Published in With Sober Senses, Oct. 7, 2021 at https://www.marxisthumanistinitiative.org/economics/henryk-grossmanns-breakdown-model-on-the-real-cause-of-the-fictitious-breakdown-tendency.html, together with interactive spreadsheet file.

There is much about Henryk Grossmann’s 1929 book on capitalist accumulation, breakdown, and crisis (Grossmann 1992) that I appreciate and even admire. He offered an alternative to the underconsumptionist and disproportionality theories of crisis that dominated Marxist discourse. He succeeded in refocusing attention on Marx’s law of the tendential fall in the rate of profit at a propitious moment, the eve of the Great Depression. The book offers many insights into the issues it addresses, as well as trenchant criticisms of Grossmann’s theoretical opponents. And his willingness to patiently and doggedly compute the evolution of his model’s variables, year after year for 36 years, without the aid of a spreadsheet or even an electronic calculator, was no mean feat either.

Grossmann characterized the alleged problem of breakdown in terms of a mass (i.e., amount) of profit that does not grow fast enough to allow capital accumulation to continue at its current rate. Generations of his devotees, as well as critics, have also focused their attention on the alleged insufficiency of the mass of profit. This is at best a misleading, superficial, and unhelpful way of understanding why capitalist production inevitable breaks down (in Grossmann’s model).

In the next section of this article, section 2, I discuss the contemporary political significance of the breakdown question. Grossmann’s breakdown model is a main source of inspiration for leftists whose outlook and politics are fatalistic. I discuss why I consider fatalism to be politically deleterious. Section 2 also briefly summarizes the features of the scheme of reproduction, constructed by Otto Bauer, that Grossmann adopted, albeit critically, and it discusses Grossmann’s criticisms of Marx’s theory of capitalist economic crises and the differences between Marx’s theory and his own.

Section 3 analyzes the Grossmann breakdown model. I show that the real cause of breakdown in Grossmann’s model is not too little profit relative to the amount of profit needed to maintain the current rate of accumulation, but too little physical output relative to the physical volume of productive demand; and I discuss why this has nothing to do with the actual crises of capitalism.

I then examine the key assumption of the Bauer-Grossmann reproduction scheme: circulating constant capital permanently grows faster than the new value added in production by workers’ labor. I explain why this assumption contradicts Marx’s value theory, and I explore the consequences of jettisoning the assumption and instead valuing means of production in accordance with the value theory. I show that the structural tendency toward breakdown simply disappears. A Grossman-style breakdown is no longer inevitable; it is not even plausible. Finally, section 3 shows that a Grossmann’s breakdown tendency is intimately bound up with a pattern of technological change that is hard to call “progress.”

In section 4, I discuss Grossmann’s recognition of the defects in the reproduction scheme he took over from Bauer, his attempt to correct the defects, and why he failed to do so. He concluded that “modifying countertendencies” could only postpone, not eliminate, the breakdown tendency he had deduced from the reproduction scheme. But because the methods Grossman employed to correct the scheme’s defects were inadequate, this conclusion was based on his intuition, not genuine knowledge, and it turns out to be false.

After briefly summarizing the preceding argument, the final section of the article argues that the breakdown model does not help us to understand capitalist economic crises and that its problems are irreparable.